This is the core information LED horticulturalists should know. We have tried to keep this brief, factual and easy to read – here goes…

Energy emitted by the Sun is known as solar radiation and includes the solar spectrum covering ultraviolet, visible and infrared. Solar radiation from the Sun is the primary source of light and energy for all life on Earth. Plants use some of this energy to grow. Solar radiation is one part of the broader electromagnetic radiation (EMR) spectrum which also includes radio waves, microwaves, x-ray and visible light.

All EMR is simply a stream of rays (mass-less particles) travelling at the speed of light, called photons. The full range of the EMR spectrum (including visible light and PAR) is measured in both wavelength and frequency. All energy has a wavelength consisting of high and low troughs like waves in the sea. While the wavelengths flow at a certain frequency measured in cycles per second or hertz (Hz).

The spectrum of the Suns solar radiation predominantly extends from ultraviolet 290 nm to 3,200 nm  which is past far red and in to infrared. However plants only use a portion of this spectrum. Plants absorb violet, blue, green, yellow, orange, and red light for photosynthesis. These wavelengths are between 400 and 700 nanometres and this portion of the spectrum is known as PAR (Photosynthetically Active Radiation).

However, PAR is a broad term and plenty of academic research shows plants absorb and use more than just the PAR spectrum. Plants absorb energy from at least 350 nm to 780 nm. However, most LED grow lights barely cover PAR let alone harnessing the benefits of small amounts of UVA and far infrared (IR).

We have specifically designed our LED grow lights to include UVA and far red within our spectrum. The UVA 350 – 400 nm helps with disease and pest resistance while the far red from 750 to 780 nm helps keep plants squat and dense. When plants can’t absorb enough far red they can assume they are being shaded and therefore grow taller to find light. This is known as shade-avoidance syndrome (SAS). So we added some far red in to keep your plants squat, dense and high yielding. 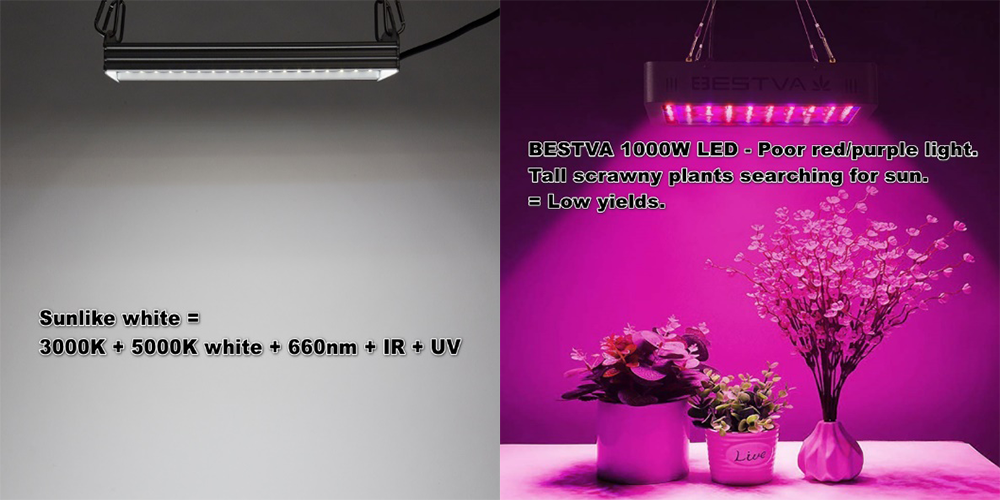 Chlorophyll is a molecule. Molecules can be simple or complex, simple examples are H2O (water) and N2 (nitrogen) while more complex molecules include chlorophyll.

Chlorophyll is the green pigment required for plants to convert carbon dioxide and water, using sunlight, into oxygen and glucose through the process of photosynthesis.

There are actually many types of chlorophyll; a, b, c and d however a and b are the main ones.

Different molecules absorb different sections of EMR energy. Water absorbs microwaves and it’s why we use  it in cooking, while calcium found in bones absorbs x-rays far more than the surrounding tissue. This enables us to generate images of our skeleton. There are three key pigments in photosynthesis each with different absorption peaks.

(1) Chlorophyll a absorbs mainly violet-blue and orange-red light and peaks at wavelength circa 430 nm and circa 660 nm.

(2) Chlorophyll b primarily absorbs blue light with peaks at circa 460 nm and 660 nm.

(3) Carotenoids a key group of pigments (lycopene red of a tomato, zeaxanthin yellow in bananas and β-carotene orange peel color) absorption wavelength is 460-550 nm in violet to green light.

Green light is broadly reflected by plants and generally not absorbed. Therefore, our LED grow lights minimise the access to green light which saves you electricity. However, we include some green for organic pest control and to maintain a broad spectrum required for healthy high yielding plants.

Lumens – Measured either by LUX (lumen/m2) or foot candle (lumen/ft2). Beware as LUX only measures the Photopic Response Curve which is visible light to the human eye. However we know plants ‘see’ absorb more than that just the visible spectrum. So…never use Lumens, LUX and foot candle when comparing LED grow lights.

PAR – Photosynthetically Active Radiation is according to Apogee 2019 a generic term which could mean ‘energy flux’ or ‘photon flux’ Watts / m2. PAR are the wavelength of energy (light) that plants ‘see’ and absorb between 400 – 700 nm. In reality plants usage spans 350 to 780 nm. PAR is not a measurement like miles, horsepower or pounds, so we don’t use PAR to measure a LED grow lights power, just what spectrum in nanometres the LED covers.

Dr Keith McCree (McCree curve) defined the range of PAR in the early 1970’s and said ‘it’s not the energy but the number of photons that cause photosynthesis, we need to be counting photons’. So Dr McCree said we need to move from PAR to PPF He also knew that wavelengths beyond PAR can help plants grow.

*Photosynthetic is the process plans use sunlight to synthesize nutrients from carbon dioxide and water.

Think of a garden hose and assume the water is PAR spectrum pouring out. PPF would simply show ‘PAR’ anywhere the water is found… it’s all PAR photons. However, PPF doesn’t outline the number of photons density or flow landing on any given point. We don’t know how strong the ‘water flow’ is.

** Luminous efficacy is a measure of how well a light source produces light. Using the PPF number and the LEDs input wattage you can work out how efficient an LED grow light is at converting electrical energy into PAR. Measuring Watts is in Joule per second (J/s). Therefore μmol / J = X and the higher X is, the more efficient your LED grow light is. For example the LM301H Samsung LEDs offer the highest efficacy at 3.10 μmol / J which creates higher yields and less wasted energy.

PPFD – Photosynthetic Photon Flux Density measures the intensity or ‘D’ Density of PPF, in this case PAR (400 – 700 nm) that ‘rains down’ on the plant on any given square meter. The number of photosynthetically active photons that fall on a given surface each second measured with micromoles per second per sq. m. (μmol/m2/s). Note this formula does include area (m2).

Think about the hose with water ‘PAR’ spraying out onto a wall ten feet away. Up close to the nozzle, in the middle, there is loads of ‘PAR’ (a high PPFD) but further away from the nozzle it disperses and is less intense, a lower PPFD. A PPFD meter is a spot measurement at any point under a light. A PPFD meter will show the highest numbers directly under the light, closest, in the middle, and this number will decrease as you move further away, down or outwards.

The Dr Bruce Bugbee, president of Apogee Instruments starting using PPFD instead of PPF in about 2016. The plant ecology world were using PPFD while those in horticulture and agronomy were using PPF.

PFD – Photon Flux Density is a term from around 2016 which measures a broader spectrum beyond PAR and includes UVA to far red 350 – 780 nm. The most up to date term. Measured with micromoles per second per sq. m. (μmol/m2/s). As outlined by Dr Bruce Bugbee, president of Apogee Instruments and professor at Utah State University in this video, see screenshot below of the extra UVA in blue and far red marked in red that he introduces in this video.

IMPORTANT – LED grow light manufacturers often claim full spectrum 350 nm and up to 780 nm but take a hard look at the spectrum graph – does it show any real depth beyond 400 or 700? It is expensive to offer the extra full spectrum plants need, but we do offer full spectrum UVA at 350 nm – 400 nm and also go beyond 700 nm through to 780 nm into far-red. We do this because it has been scientifically proven plants use this part of the spectrum and it helps grow dense, thick, short healthy plants. If your LED grow light only covers PAR, you leave important parts of the spectrum out of the plants growth cycle and this reduces overall yield which costs you money.

Here at Voost we use an UPRtek spectrometer. This tool was specifically designed to measure PFD – beyond PAR at 350 to 780 nm. The sensor head conforms with the JIS AA Class and DIN B Class Illumination requirements.

How to compare LED grow lights?

We tested some of the very cheap UK and USA LED grow lights offered on Amazon which had good reviews. Our tests showed they had noisy fans and unbranded LEDs mainly used by junior growers. We tested them and noted the centre PPFD often changed violently from 500 to 850 at 18 inches. This is due to the poor drivers used and a lack of constant current. We have also reviewed all the known LED grow light brands in the UK and USA and we can say hands down that our model is a bullet proof, solid state full spectrum commercial workhorse you will be proud to own and will produce primo yields at the best price per true Watt. Our mates at the biggest Dutch seed companies have used our models for nearly a decade now.

We have sold these lights since 2011, mainly in the USA and since then refined the modular construction, driver, the LED type and mix for the indoor UK market. We deliver full spectrum LED grow lights within an industrial grade horticultural fixture designed to be quiet and maximise dense yields.